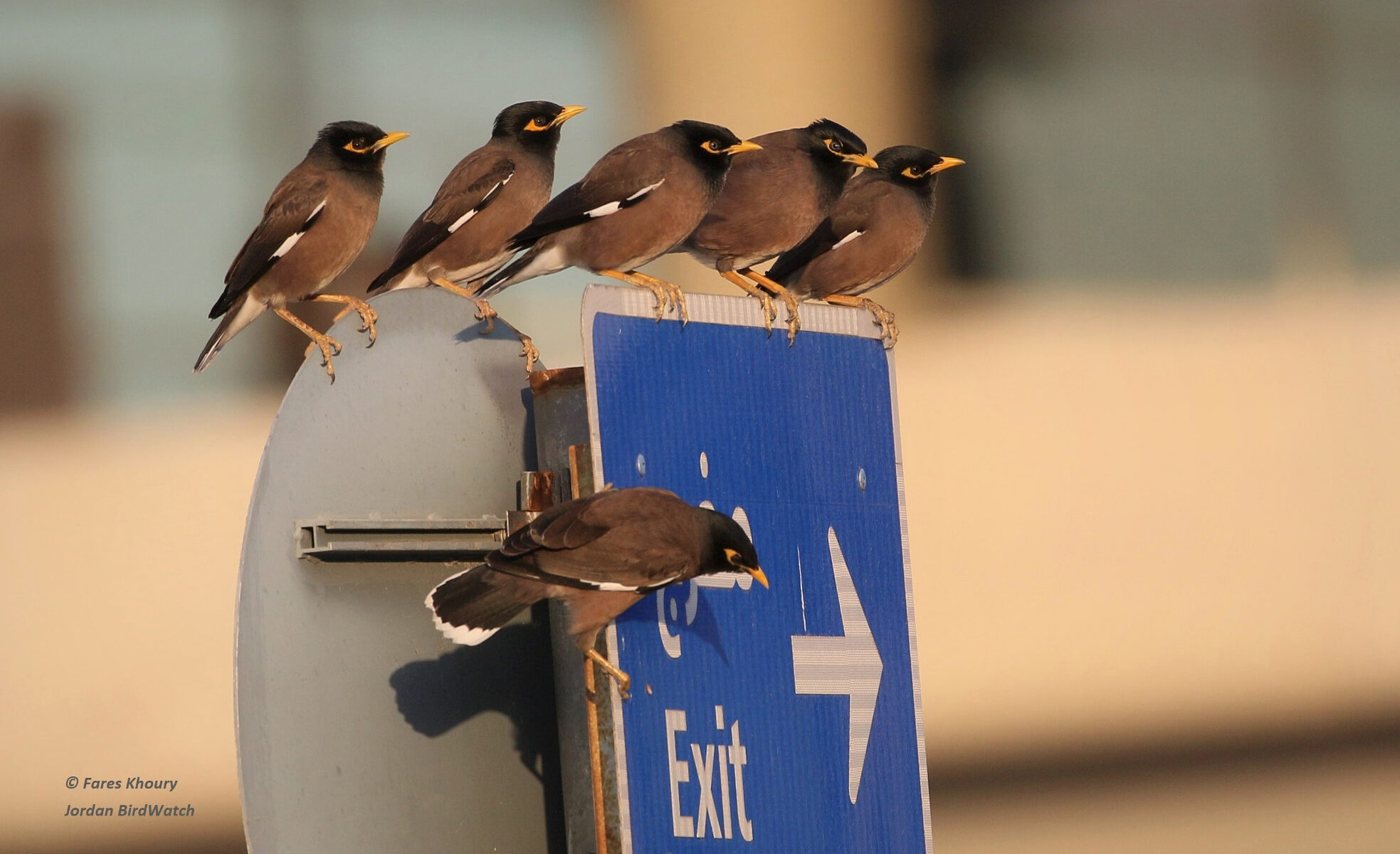 and the impact on native species

The impacts of introduced birds on native species and human economy and health are generally considered weak; however, these impacts e.g. on agricultural crops and on native birds by competing for nest sites or predation of nests, may vary according to the alien species itself and various factors in the area being invaded.

One of the most harmful invasive bird species at the global level is the common myna (Acridotheres tristis Linnaeus, 1766) that is originally native to Central and Eastern Asia (Lowe et al. 2000).

Researchers from Jordan BirdWatch, and the Biology Departments of the American University of Madaba (Jordan) and Imam Abdulrahman Bin Faisal University (Saudi Arabia), are carrying out joint studies on the spread and impacts of invasive species in the region. The results of the first detailed study on the spread and potential distribution of common myna in Jordan is published in the scientific journal “Management of Biological Invasions” (Khoury et al. 2021; https://doi.org/10.3391/mbi.2021.12.3.08).

The common myna spread into the Jordan Valley around 2010, as a result of secondary expansion of an invasive population from a neighboring country. Consequently, the myna expanded throughout many parts of Jordan, driven mainly by anthropogenic factors.

The Common myna, also called Indian Myna, can be seen nowadays in the hotel areas of the Dead Sea and Aqaba, in the streets of most Jordanian cities, in agricultural and semi-urbanized landscapes of the Jordan Valley and NW Jordan including the ruins of Jerash and Um-Qais, desert towns and other facilities along major highways.

Similarly in the case of the highly invasive mesquite shrub Prosopis juliflora which was subject to recent projects and studies by JBW in the Jordan Valley, the rapid expansion of alien invasive species indicate serious ecological disturbance caused by random and extensive urbanization, spread of various infrastructure in the landscape and in some cases (e.g. mesquite) overgrazing by livestock.

The study provides a nationwide baseline about the distribution of the invasive common myna, and potential for further spread, as a baseline for monitoring and prioritizing actions to control spread and impacts.